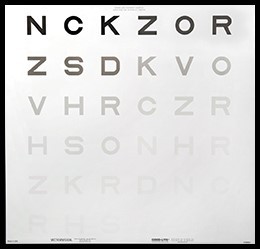 The ELCT was developed specifically to help clinicians and researchers evaluate AMD, diabetic retinopathy and other retinal diseases. As the Baby Boomers age, more emphasis has been placed on detecting and treating retinal diseases. Until the development of the ELCT, there was no standardized and highly sensitive way to evaluate patients with poor vision, ie vision of 20/70 or worse. The ELCT is very useful for measuring vision loss in patients with retinal disease and for evaluating the improvements in visual function of these patients with treatment.

What is Letter Contrast Sensitivity?

The ELCT test provides a measure of letter contrast sensitivity. Letter contrast sensitivity is the lowest contrast level at which a patient can correctly identify a letter of a given size. This is different than high contrast acuity, which measures the ability to read letters of different sizes at one high level of contrast, typically black-on-white. Standard acuity, because it measures only black-on-white, is a very poor measure to determine the loss of vision with disease, or more importantly, subtle improvements in vision with treatment. 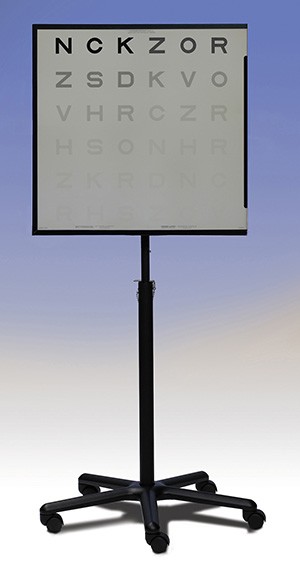 The ELCT is the first standardized test for letter contrast sensitivity. The ELCT presents 20/630 letters (viewed at 1 meter) in triplets of varying contrast. All triplets are balanced for letter difficulty and differ in contrast by 0.15 log contrast step. The ELCT test is backlit by the ESV-3000 testing instrument (shown at left), which provides a uniform luminance of 85 cd/m2. The auto-calibration circuitry of the ESV-3000 monitors and adjusts the light level to ensure consistent luminance from test to test. The highly controlled and sensitive contrast levels of the ELCT, in combination with the auto-calibration of the ESV-3000, ensure the accuracy and stability of the testing results.

ELCT Chart 2 presents 4 contrast levels from 1.8 to 2.25 log contrast. Charts 1 and 2 can be inserted interchangeably into the ESV-3000. Studies show that the average letter contrast sensitivity for the normal younger adult population is 2.2 log contrast. Also, the ELCT is the same size as standard ETDRS charts, so the ELCT can also be exchanged in the ESV-3000 with an ETDRS test chart, thus allowing the evaluation of letter contrast sensitivity and ETDRS acuity under the same luminance testing conditions.

Administering and Scoring the ELCT Test

To administer the ELCT, ask the patient to begin reading across the chart, starting in the upper left hand corner (the highest contrast letters). The patient is encouraged to read down the chart until he or she can no longer identify at least 2 letters in each triplet.

The patient is assigned a score of the log value for the last row where he or she can read at least 2 letters, subtracting the number of letters missed in the triplet. Each letter has a value of 0.05 log unit. For example, if a patient is able to read two letters in the triplet with 1.65 log contrast, but unable to read any further letters, then the patient would have a score of 1.60 log unit (1.65 – 1 X .05 = 1.60)

How is the ELCT Different Than Other Tests?

The ELCT was specifically designed so that the letter size corresponds to the ETDRS scale. Unlike, for example, the Pelli Robson test which uses an arbitrary letter size of approximately 20/700. The ELCT high contrast data can be directly translated to ETDRS results.

The ELCT is used with the standardized luminance provided by the ESV-3000. The ELCT administered on the ESV-3000 is unique as other chart type tests for letter contrast sensitivity do not have standardized illumination.

The ELCT is produced using a proprietary screen printing technique. Other letter contrast sensitivity tests are produced using offset printing which has a number of drawbacks, including fading of the ink over time.

Obviously, a letter contrast test that fades over time invalidates the test results obtained as well as the interpretation of the data.

The ELCT is the same size as standard ETDRS tests. This matching size allows the ELCT to be tested using the standard ETDRS illuminator devices, such as the ESV-3000. And, for researchers, it provides for easy and interchangeable testing of letter contrast sensitivity and ETDRS under the exact same luminance conditions.

The ELCT contrast levels are determined using the Weber contrast calculation shown below.

Luminance Max is the luminance as measured in the white backlit area immediately adjacent to the letter.

Luminance Min is the luminance as measured in the middle of the stroke width of each letter.