Contrast sensitivity (CS) provides an accurate and sensitive way to evaluate loss of vision with macular degeneration and to measure the stabilization or improvement in vision with treatment. The standardization of the CSV-1000E provides a means to consistently measure visual function in ARMD so that the results are easy to compare to age-related population norms and from visit to visit. Since ARMD can affect vision over very long time periods, the standardization of test conditions is key to consistent measurements and the understanding of any change in vision for these patients due to disease progression or treatment.

Use of Contrast Sensitivity for Macular Degeneration

How to use the CSV-2000 and CSV-1000 to diagnose early vision loss from AMD and how to track progression and treatment.

Early in the ARMD disease process, patients can begin to lose central vision, but retain good acuity. The typical early ARMD patient will show losses in contrast sensitivity in the higher spatial frequencies (12 and 18 cpd) before any change in high contrast visual acuity and often before distortions in vision can be detected with an Amsler Grid. The CS graph to the right shows the results for a typical early ARMD patient. Note the patient’s CS is below the normal range for his age group for Rows C and D.

Data suggests that patient vision for those with early ARMD can be improved by treatment with certain supplements. Considerable work has been done with lutein supplements and the related changes in contrast sensitivity. The bar graph below shows data from Stuart Richer and his team based on a placebo controlled study where patients were treated with lutein supplements. ARMD patients treated with lutein and lutein-A (lutein with additional carotenoids, antioxidants, vitamins, and minerals) showed significant improvements in contrast sensitivity compared to those treated with a placebo.

The bar chart of CSV-1000E results from Stuart Richer et al showing before and after nutritional therapy for ARMD patients. Note the significant improvement after lutein treatment at 3 and 12 CPD and after lutein-A at 3, 6, 12 and 18 cpd.

Tom Henderson, MD, recently conducted a study to compare the results of different types of nutritional treatments for patients with drusen and at risk for AMD. Dr Henderson had used a variety of eye nutrition gel cap supplements over the years with his patients; including PreserVision (AREDS2), Eyepromise and MacuHealth, with limited success. Dr Henderson became intrigued when he noted the significant improvements in patients’ contrast sensitivity and ocular health when his patients switched from these gel caps to Lumega-Z, a micronized lipid-based medical food formula. He decided to conduct a prospective randomized study that evaluated contrast sensitivity levels pre and post treatment with Lumega-Z versus the AREDS2 formula (PreserVision) in patients with drusen and high risk of AMD.

Dr Henderson’s study found that improvements in visual function (CSF) in the Lumega-Z Group were statistically significant and definitive. AREDS-2 Group showed no statistical change. See the graph below. 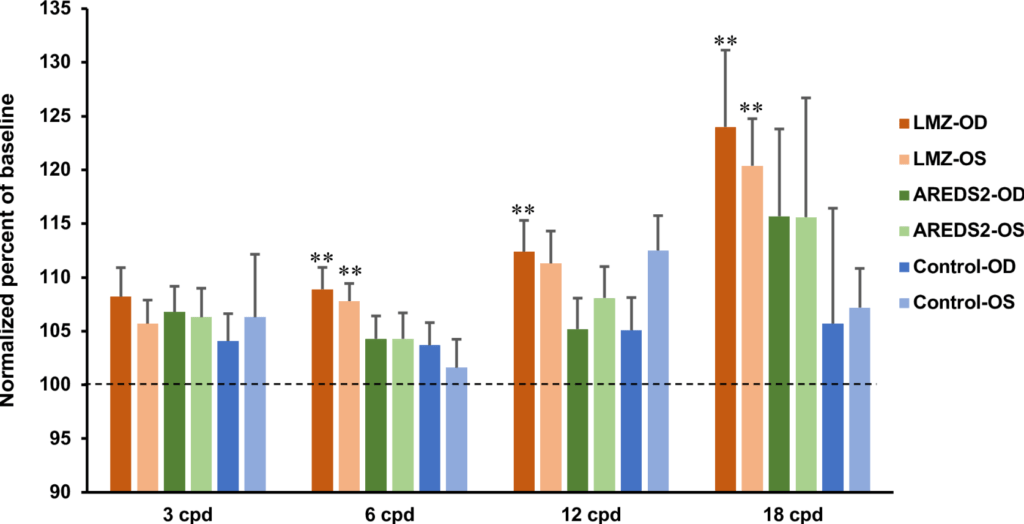 This graph shows the typical clinical result for a patient who has been successfully treated with a vitamin or nutrient supplement. Note that the patient has CS scores below the normal range when ARMD is detected and then after supplementation, the CS recovered into the normal range. Clinical use suggests that a minimum of a three to six month time period is needed to detect improvements in vision after supplement treatment.

Recent studies using the CSV-1000 to measure the vision changes in AMD patients after nutritional therapy are revealing very positive results for individual patients. The graph to the right shows the clinical data for the left eye (OS) of a 70 year old white female who has been diagnosed with drusen and early AMD. The “Before” curve represents the patient’s contrast sensitivity before treatment and the “After” curve shows the patient’s response after 6 months of nutritional treatment with Lumega-Z. Note that the patient shifted up in contrast sensitivity across the full range of the curve, at all spatial frequencies. The CSV-1000 was able to directly measure the patient’s vision change with treatment, even though the patient had no change in acuity. The patient had 20/20 acuity before and after six months of treatment. Only the left eye (OS) was evaluated in the study and the results of this eye are shown in the graph.

For more advanced cases of macular degeneration, where visual acuity has already been significantly affected, letter contrast sensitivity (as opposed to sine-wave contrast sensitivity) may be a better measure for the patients. For these patients, the Evans Letter Contrast Test (ELCT) is a better measure for visual capability and improvement as opposed to using the contrast levels offered on the CSV-1000E or the standard CSV-2000. Once a patient has lost 2 to 3 or more lines of acuity, his or her ability to see smaller low contrast objects at a distance of 8 feet becomes diminished, and a larger higher contrast range of test targets is needed to accurately evaluate vision.

For testing an ARMD patient with the ELCT test, place the patient at 1 meter and ask him or her to read down the chart starting in the upper left-hand corner (ie at the highest contrast level). The score on the ELCT test can then be used to quantify the visual status of the patient from a real-world perspective and to establish a baseline to evaluate further disease progression or to measure improvement with treatment. In most cases, changes in contrast sensitivity can be detected with the ELCT three or more months before any change in vision can be detected with high contrast acuity. The ELCT uses standardized test lighting system which auto-calibrates the light level and thus provides an excellent platform to obtain consistent test results for patients for comparison over time or to measure the improvements with treatment.

For patients with early ARMD (20/50 to 20/70 or better), use the CSV-2000 or CSV-1000E to evaluate the disease progression or improvement with treatment. For more advanced patients, it is best to use the ELCT.